Recent research in comparative cognition has led to the discovery of surprisingly complex behaviour in animals as different as social insects (e.g. bumblebees), birds (e.g. corvids and parrots), and non-human apes. At the same time, developments in artificial intelligence and robotics have produced increasingly autonomous artificial systems capable of solving problems previously thought to be the exclusive privilege of real brains, such as using visual or tactile inputs to recognize objects and their properties, or transfer skills from one problem to another.

The Parrobots project includes scientists from Berlin, Vienna and Oxford,  and aims to contribute to both fields, investigating the behaviour of real birds and of robotics counterparts.  We conduct experiments in which parrots are asked to solve mechanical problems such as manipulating a series of interlocked obstacles to open a reward box, map how their performance evolves and explore their ability to generalize to novel problems, and use the tools of artificial intelligence and robotics to emulate their behaviour.

We place emphasis on reproducing not just the final successful behaviour but the path to competence, with the goal of testing hypotheses about animal intelligence through the behaviour of our artificial agents. The philosophy is that if a robot progresses towards solving a given problem like a parrot, makes errors like those a parrot makes, and generalizes across problems like parrots do,  then the hypotheses about parrot behaviour used to build the robot have a good chance of being correct. Simple reinforcement processes (trial and error) are not sufficient to achieve our goals, and even minimal emulations require explicit hypotheses about prior predispositions, learning by experience, generalization, working and reference memory, planning, exploration, and so on.

Our long term target is to produce robots that build a sufficiently rich ‘folk physics’ to make them capable of innovative problem solving when facing a vast array of novel problems. 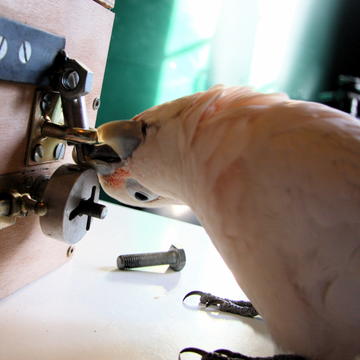 Can I crack it?